For the next year I am doing a project – a different cake each week for an entire year – following the book All Cakes Considered: A Year’s Worth of Weekly Recipes Tested, Tasted and Approved by the Staff of NPR’s All Things Considered. You can read about the start of my project here and look at each week to date here.

The first 3 recipes in the book are all pound cake and I wasn’t convinced that one pound cake differed that much from another pound cake so I figured this week’s cake was mainly to practice all the steps from last week. 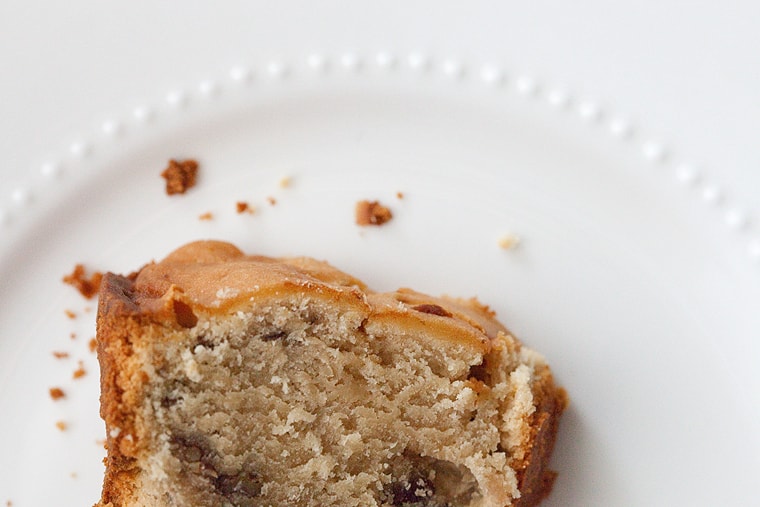 And I was right about that, making it was pretty much the same as last week. But I was wrong about one pound cake not being that much different from another pound cake. The brown sugar gave this cake such a rich flavour and I loved the addition of nuts.

If you read about my week one cake last week, you’ll know I thought I slightly overcooked the sour cream pound cake. So I was ready this time. Ten minutes before it was supposed to be done, I checked it with a cake tester. And it came out dry. So I checked it again and again and again just to be sure. And it was fine all those times too. So I took it out.

And was so disappointed, 2 hours later when it had cooled, to find out that it wasn’t quite cooked. Not sure what to think of the completely clean cake tester but this one definitely needed the full cooking time.

Recipients: This one had a couple potential recipients – a playdate on Monday and a mom’s group on Tuesday. But there is no way I was taking anyone an undercooked cake so this one was all for us.

Verdict: The flavour was amazing! Which makes it even more disappointing that I didn’t cook it long enough. I will definitely be making this one again, except cooking it for the full time this time around.

The recipe also comes with an optional Cream Cheese Frosting. I didn’t make the frosting and I really don’t think it needs it. It was a little on the sweet side as it is and I think adding the frosting would have made it too much.

Up next: Missy G’s Sweet Potato Pound Cake (not so sure about that one).

We finally got haircuts (with masks for everyone a

I need some gardening advice... talk to me about h

📷 BOOKINGS ARE NOW OPEN FOR JUNE, JULY AND AUGU