Baking, however, is a different matter. I love to bake. So a few weeks ago when I came across the book All Cakes Considered, I knew I’d found my project. 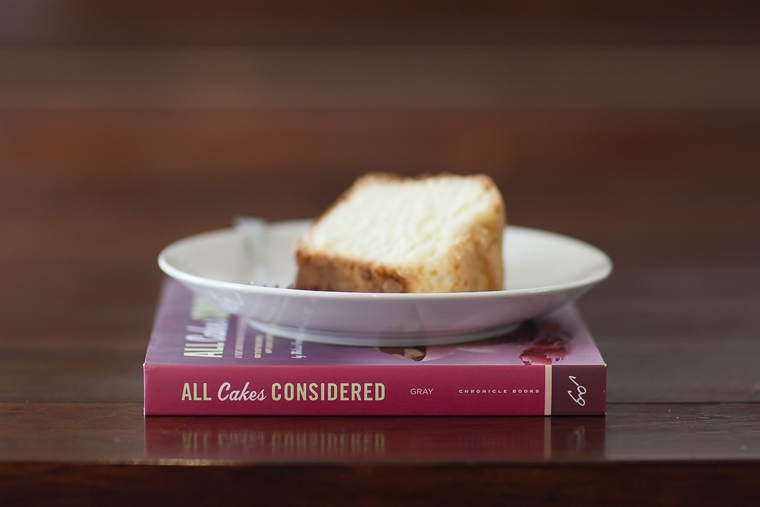 All Cakes Considered is a recipe book of, you guessed it, cakes – one recipe a week for the year. It starts with an easy recipe and gets progressively more complicated as you work your way through.

I was hooked for a couple of reasons…

1. I take a lot of shortcuts. I know that butter and eggs should be at room temperature before you use them. But putting the butter in the microwave for 20 seconds is almost the same thing, isn’t it? And dunking the eggs in warm water for a few minutes works, doesn’t it? I’m also not really careful about how exact my measurements are. The instructions in the first recipe are unbelievably detailed. With each step she walks you through exactly what you need to do and for how long.

2. I tend to make the same things. I love to bake but I usually make the same few things (or the same types of things) over and over. So going through the book in order means I’ll try lots of recipes I ordinarily would have skipped right by.

This cake is pretty simple but it took me twice as long to make it as it usually would – and it was definitely worth it. Taking the time to beat the butter, sugar and eggs for as long as I did made for such a consistent, fluffy batter.

I cooked the cake for the length of time stated in the recipe but I think it was slightly over-cooked which is a little surprising because my oven usually runs a bit cold.

Recipients: My aunt and uncle visiting from the Island. It was a big cake and I wondered what we would do with it all but a close friend was having a really tough week so I wrapped up a big chunk of the cake and put it in with a meal I was taking over for her and her family.

Verdict: Good but super-sweet (and I have a wicked sweet tooth). Next time I’d make it with a bit less sugar. It was also a touch on the dry side from being over-cooked. I think I’ll try pulling it out 10 minutes earlier next time.

Up next: Brown Sugar Pound Cake.

We finally got haircuts (with masks for everyone a

I need some gardening advice... talk to me about h

📷 BOOKINGS ARE NOW OPEN FOR JUNE, JULY AND AUGU